The habitats of rare animals are at risk, including pandas in China and orang-utans and elephants in Borneo. Our research has provided the genetic evidence underpinning conservation plans to preserve these species.

Strategies to save rare animals are sometimes piecemeal and can lack data to show pressures on forest habitats. In Borneo, Professor Mike Bruford and his team gathered genetic and population data to show orang-utans would be extinct within 50 years without action to re-connect riverside forests.

The team also showed the fragmentation of elephants' habitats forced them to forage further afield, leading to conflict with humans. In China, Bruford's techniques showed the giant panda population was larger than earlier estimates. 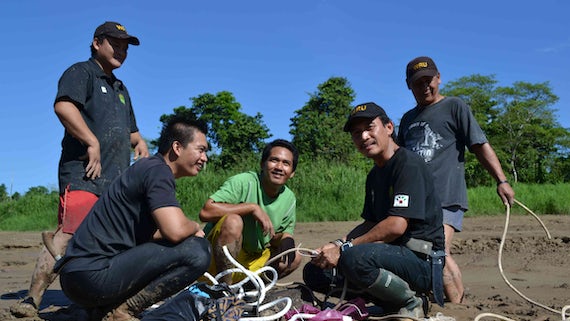 A tribute to excellence

The Danau Girang Field Centre has been recently recognized by the Malaysian State Government of Sabah for its contribution to the conservation effort of its most valued areas of natural beauty.

The two Borneo species action plans for orang-utans and elephants are helping Malaysia to meet its obligations under the Convention on Biological Diversity.

Cardiff's work on giant panda dispersal has influenced the Chinese strategy of guiding individual pandas to join the dwindling population in Xiaoxiangling.

Our bioscience sandwich courses offer a year long placement, where students can work on biodiversity projects and develop active conservation.