At an early age, while studying for a gold medal from Metz Conservatoire (France), Pierre-Maurice Barlier joined the chorus of the Opéra Théâtre de Metz, his home town. 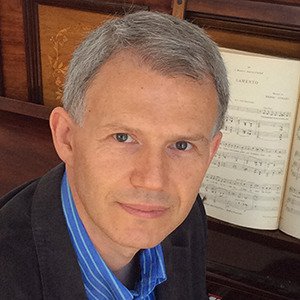 He continued his studies in Luxemburg with Ionel Pantea, before heading to London to study with Noëlle Barker at the Guildhall School of Music and Drama. After returning to France, he worked with Romanian soprano Aneta Pavalache.

As a baritone, Pierre-Maurice Barlier has sung various solo roles and recitals, with companies including British Youth Opera, Opéra Théâtre de Metz, Atelier Lyrique du Centre, and in venues such as the German and Romanian Embassies in Paris.

As a chorus member, he has sung with many prestigious companies including City of Birmingham Touring Opera, Opéra de Paris, Chœur de l’Armée française, Monteverdi Choir, and in venues such as Snape Maltings, Opéra Bastille and Opéra Garnier, Théâtre du Châtelet, Queen Elizabeth Hall and the Royal Albert Hall.

Pierre-Maurice Barlier now dedicates his time to teaching vocal technique and is a passionate pedagogue of the Romanian school of singing. He also teaches French repertoire in all its aspects: pronunciation, interpretation and comprehension of French text and prosody across all genres, from mélodie to opera recitatives.

He has recently worked with Welsh National Opera where he undertook extensive coaching on productions of Rossini’s Guillaume Tell, Bizet’s Carmen and Debussy's Pelléas et Mélisande. He is also on the staff of Royal Welsh College of Music and Drama.