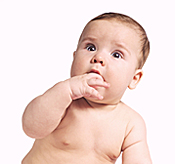 One-year-olds sustain 10 times as many burns and scalds as older children, suggests a review of UK emergency department and burns units cases, undertaken by researchers at the School of Medicine.

The primary culprits are hot drinks, irons, hair straighteners and oven hobs, prompting the authors to conclude that more targeted prevention is needed.

They draw their conclusions, from across the UK and Ireland, on data from 1215 children under the age of 16 who were treated in five emergency care departments, one burns assessment unit, and three regional children's burns units across the UK.

Nearly one in five (17.5%, 214) had to be admitted to a specialist burns unit; the remainder were treated in the emergency department.

All scald injuries were sustained at home. Hot drinks accounted for most (55%, 305 out of 554) of the scald injuries among young children, and in half of cases (48%), this happened when the child reached up and pulled down the cup/mug of hot drink - mostly tea.

Nearly all scalds affected the front of the body, predominantly the face, arms and upper trunk in young children, and the lower trunk, legs, and hands in older children.

Nearly half of older children sustained a contact burn outdoors. Two thirds of all contact burns were to the hands.

"Children make up half of all burns and scald cases seen in hospitals, with the potential for lifelong scarring/deformity and even death," said Professor Alison Mary Kemp from the School of Medicine's Institute of Primary Care and Public Health.

"Successful prevention is most likely to involve product design or environmental modification, and should be considered for hair straightener, iron, and oven related burns," she added.

But she acknowledges that universal product modification for mugs will be challenging. Heightened awareness and behaviour change among parents/carers will be essential to curb the number of such incidents.

This study highlights the potential benefits of detailed routine data collection and underpinned a successful bid to the Healing Foundation who have funded The Burns Collective: Children's Burns Research Centre. The five-year collaborative research programme, between Cardiff, Bristol and Bath Universities, and the University of West England, is addressing the prevention, treatment and rehabilitation of childhood burns.

An award winning team of University child health experts will lead a research drive to identify new ways of preventing burns to children.

"Seventy per cent of burns and scalds to children affect pre-school children. The most common scalds are from hot cups of tea and happen to one year old toddlers - too many children are scarred for life from these scalds," according to Professor Kemp, who will work alongside a team from the Universities of Bristol, Bath and West of England on the project as part of a national research drive funded by the disfigurement research charity, the Healing Foundation.

"Some burns can be life-threatening and in many cases the effects can be life-long, and include physical scarring, chronic pain and psychological difficulties.

"Our research will seek to work with families of young children to prevent burns and scalds happening in the first place and to improve knowledge about appropriate first aid for burns.

"We also seek to work with families of children who have had a burn to help them to improve safety measures in the home and reduce the likelihood of future burns or injuries," she added.

The research builds on previous research collaborations between Cardiff and Bristol Universities to develop primary and secondary preventative interventions to reduce burns in children.

The team will establish a database which will be used to improve understanding of childhood burns, and to test interventions using individual or cluster randomised trial designs.

"We will work with people on the ground - Health Visitors, children and their parents to put new interventions into practice and we hope, ultimately, to prevent the pain and suffering that affects the lives of so many children unnecessarily as a result of being burnt," Professor Kemp adds.

The research is one element of a new £1.5M research centre, designed to find new advances in the prevention and treatment of children's burns. It will be officially opened at Bristol's Frenchay Hospital. The Healing Foundation Centre for Children's Burns Research will see experts from North Bristol NHS Trust, University of Bristol, University of West of England and the University of Bath join forces to become the Healing Foundation Burns Collective to develop new techniques and approaches to prevent burns and scalds and improve the clinical care and recovery of children who have burns.

The Centre has been awarded the funding, over five years, from the Healing Foundation, a national charity funding research into new surgical and psychological healing techniques for people living with disfigurement.

The Welsh Government through the National Institute for Social Care and Health Research Clinical Research Centre (NISCHR) is also contributing £280,000 to the project. Welsh Falklands War veteran and Lead Ambassador for the Healing Foundation, Simon Weston OBE, will attend the launch and visit Frenchay Hospital.

Simon Weston said: "After many years of campaigning – finally, we have a dedicated burn centre that we so desperately need.

"The team assembled to drive this research programme is world-leading and have beaten very stiff competition, from leading universities and hospitals across the UK, to win this important award.

"I particularly welcome the fact that experts from Wales and Cardiff University will play such a leading role, especially in developing new prevention measures.

"I hope the work of this centre will deliver real benefits to those children who suffer scalds and burns as well as bring new understanding to how such injuries in the future can be better prevented."

The Child Protection Systematic Reviews team, based in Cardiff University's School of Medicine, received the 2013 BMJ Improving Health Awards 'Child Health Team of the Year' in May for their work in identifying the best way of accessing available evidence to understand and evaluate injuries  in young children working towards the prevention of child abuse and neglect.

This work will help inform the new research.