Muslim chaplains in a range of British public institutions are performing vital roles as problem-solvers, mediators and role models, a new book reveals.

Understanding Muslim Chaplaincy examines the work of Muslim chaplains in universities and colleges, prisons, the armed forces, hospitals, airports, shopping malls and in the community, throughout England and Wales.

The research by Professor Sophie Gilliat-Ray and Maulana Dr Mansur Ali of the Centre for the Study of Islam in the UK at Cardiff University, and Professor Stephen Pattison of the University of Birmingham, is the first study of its kind to examine the work of the 450 full-time, part-time, and volunteer Muslim chaplains in the UK.

"We found that Muslim chaplains are tremendously important carriers of knowledge about how to live and work in a multi-faith society," said Professor Gilliat-Ray, director of the Centre. "They are able to work within the sometimes complex bureaucracy of the institution, while also engaging with diverse Muslim communities. This puts them in a unique position and able to foresee and avoid problems or conflicts before they arise."

The book reports many examples of negotiation or compromise:

A hospital chaplain recounts how he dealt with the prospect of large numbers of family wanting to attend a recently-deceased relative, and managed to prevent disruption to other patients and staff.

Female chaplains, who normally wear the full veil (or niqab), explain why they are willing to compromise their beliefs and opt not to wear it at work.

A prison chaplain explains how he sought to allay fears of radicalisation by inviting the governor and other senior staff to Friday prayers.

The book also explores how chaplains can provide a positive male role model for some young offenders, how they can sometimes intervene to resolve family difficulties, and break down barriers by helping non-Muslim people.

"Overall, the picture is very positive," said Professor Gilliat-Ray. "But, disappointingly, their expertise in relation to sensitive pastoral issues such as substance abuse, or complex ethical issues in relation to medical matters, does not seem to filter back into Muslim communities very much.  In some cases communities may view chaplains with a degree of suspicion, fearing that they have perhaps become too 'liberal'. In some prisons, Muslim inmates may regard chaplains as 'government agents' and some staff may see them as 'agents of radicalisation'. 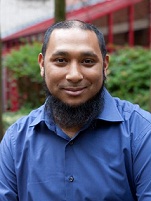 "The research shows how challenging the role is. Some prisons have a Muslim population of 35 or 40%, covering a huge range of beliefs and practices. Chaplains have to work across these, demonstrating remarkable levels of pragmatism.

"On the positive side, the prison service can be credited with creating the opportunity for Muslim clerics to debate issues without being under the gaze of the Muslim community."

The book, published by Ashgate on October 3, represents the first study of Muslim chaplains in the UK, and the biggest study of UK chaplaincy in recent years. It also provides comparison between the UK and the USA.