Nearly 100 AS-level students enjoyed an afternoon of talks and workshops at Cardiff University as part of Chemistry Week 2015. The ChemNet event, Chemistry in Health, brought together the Schools of Biosciences and Chemistry and highlighted some of the many ways that these subjects work together.

Prof. Eshway Mahenthiralingam and Dr Joel Loveridge spoke about their research on the discovery of new antibiotics. Dr James Redman described his group’s project on medical diagnostic sensors, and Prof Angela Casini rounded off the session with the story of her career journey through chemistry and pharmacy across Europe, highlighting the versatility of transition metals. These themes were then further explored during hands-on workshops, with students relishing the opportunity to talk with the researchers. 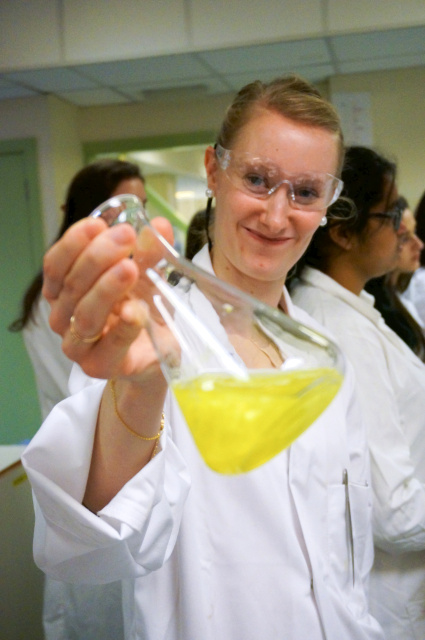 To illustrate how sensors can detect biomolecules, students used scanning potentiostats to electrochemically detect vitamin C in fruit juice. Not only did they learn how sensors can be used to diagnose disease, but they also explored the antioxidant nature of vitamin C.

Students enjoyed watching a liquid ‘magically’ change colour as it was poured from one beaker to another. This demonstration shows the formation of different metal coordination complexes and relies on small amounts of reagents being hidden in each beaker. In a second experiment named “golden rain”, a stunning suspension of glistening yellow crystals appeared when two clear solutions were mixed together, this time due to formation of an ionic compound.

When asked after the event, students commented that they had learned about the links between chemistry and biology, the varied applications of chemistry and the diverse career options available to chemists.