Learning from the community impacts of the Lee Rigby murder

Criminologists and computer scientists at Cardiff University are looking at what lessons can be learned from the murder of Lee Rigby for managing the community impacts of terrorist attacks of this kind in the future.

The Intelligence and Security Committee (ISC) report issued today (25 November) identifies that it will be impossible to prevent lone wolf terrorist attacks in the future. The study, funded by the Economic and Social Research Council (ESRC), has been conducted by researchers at the Universities' Police Science Institute and the School of Computer Science and Informatics to identify the lessons for better managing the consequences of terrorism when it happens.

The research has found that:

o   implications for the first response by police to such attacks, with witnesses tweeting direct from the scene;

o   social media becomes a key information source for the public when such incidents occur, there was in excess of 800 tweets a minute about the Lee Rigby murder at its peak;

o   the suspects were first named on Twitter - several hours before their identities were released by the broadcast media.

*  In the days and weeks after the murder there was a spike in hate crimes and public order incidents. These incidents happened in different towns and cities across the country.

*  Over the past few years the beliefs of young Muslim people that police will treat them fairly has been declining (as shown in the graph below). This has important implications for the Government's Prevent Strategy and how counter-terrorism resources are used following future incidents. 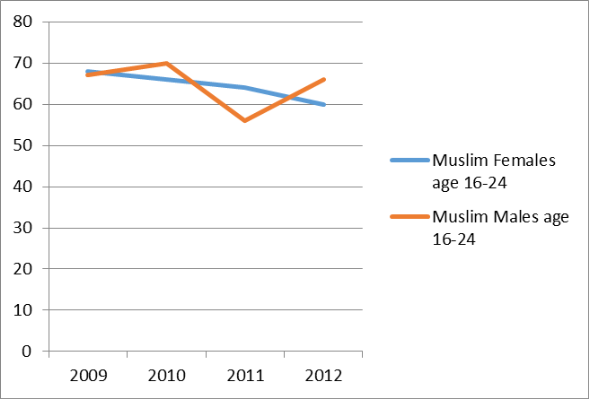 Figure 1: Percentage change in young Muslim men and women who perceive that the police would treat them fairly

Professor Martin Innes, Director of the Universities' Police Science Institute who is leading the research, said: "A lot of attention focuses upon how social media can be monitored to spot individuals who pose a potential risk of terrorism. But as the Intelligence and Security Committee Report identifies, in practice this is much harder than might be assumed, and not all attacks can be detected, especially those involving 'lone wolf' assailants. Reflecting this, our research is focused upon what can be learnt for the future from the murder of Lee Rigby in terms of improving the management of community impacts when terrorist incidents do occur.

"Our work has shown that social media is increasingly important in influencing how the public understand such attacks and what happens in the aftermath. There are very important consequences for the police and authorities in terms of taking the heat out of a tense situation and reducing the opportunities for the kinds of 'secondary crimes' that we saw following Lee Rigby's killing."

The 'After Woolwich' research project has been funded by the ESRC under their Urgent Priorities Grant Scheme: http://www.esrc.ac.uk/my-esrc/grants/ES.L008181.1/read.