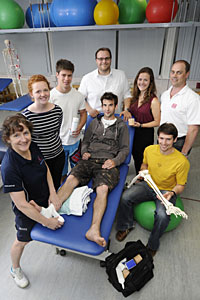 A Cardiff University physiotherapist has been selected to join the army of volunteers who will be working at the London 2012 Olympic and Paralympic Games.

Dr Nicola Phillips, who works as director of postgraduate healthcare studies at the School of Healthcare Studies, will swap her day job for the role of a lead physiotherapist at the Olympic Park's Polyclinic during the Games.

She will help head up a team of chartered physiotherapists acting as 'Games Makers' who are giving up their time to help ensure London 2012 runs as smoothly as possible.

Dr Phillips said: "It's a tremendous honour and privilege to be leading such a fantastic team of physiotherapists at a 'home Olympics'. It's a once-in-a-lifetime opportunity and it's wonderful that so many UK-based chartered physiotherapists will get to experience the Olympic atmosphere and learn skills they'll be able to take back and apply in their day job."

Dr Helena Johnson, chair of the Chartered Society of Physiotherapy (CSP), said: "Physiotherapists will play an important role at the London 2012 Olympic and Paralympic Games, and being selected as a Games Maker is a big achievement. Nicola can look forward to the experience of a lifetime."