Boys and girls speak out on sexism and sexual harassment

New research by Cardiff University has revealed how pre-teen boys and girls feel about growing up in an increasingly sexist society. 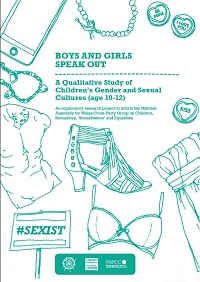 Commissioned by the NSPCC and the Office of the Children's Commissioner for Wales, this research has, for the first time, gathered young people's perspectives on how they feel about growing up in Wales today.

In 2012 Jocelyn Davies (AM) set up the National Assembly for Wales Cross-Party Group, Childhood Sexuality - 'Sexualisation' and Equality. The launch of the group stressed how children's own experiences have been absent from media debates and public concern over the sexualisation of children.

In total 125 children from urban and rural south Wales took part in the research that aimed to bridge the gap between what adults think they know about childhood and sexuality and what children actually say about these issues.

The report, 'Boys and Girls Speak Out: A Qualitative Study of Children's Gender and Sexual Cultures (Age 10-12)' was launched today (5th December 2013).

Professor Renold said: "The researched focused on what children themselves thought about adult fears that they are growing up too quickly, too soon. It also focused on body image, fashion, friendships, peer cultures, boyfriends and girlfriends, and how different contexts, online and offline, shaped their day to day lives.

"Central to all of this was paying attention to the diversity of experience, which meant talking with children from different social and cultural backgrounds.

"We want to provide the Welsh Government with enough knowledge to tackle the issue of sexualisation. Adults can often misinterpret why children and young people are dressing a certain way, talking about girlfriends and boyfriends at an early age and being so concerned with looks – but their reasons may be very different than simply wanting to 'grow up' too soon.

"When girls talk about wearing high heels, not to look sexy, but to get respect, feel independent and not to be treated like dirt, we need to think again about what it means when children want to 'look older'.

Some of the young people who Professor Renold spoke to have been quoted below*:

"When you look older, people no longer treat you like dirt."  (Maria, age 10)

"At (primary) school you just had to go out with someone, it was a virtual rule. If you had a girlfriend you were marked out as cool, if you didn't you were called a chav." (Nico, age 12)

" I got called strange by boys … cos me and this girl Alice used to hang out. so in the end we made up a lie that we were cousins." (Jared, age 12)

"I hardly go out anymore, I just stay in my PJ's … I am so self-conscious … I don't like to walk past guys … I just feel like they are going to talk about me or they will judge me." (Aneria, age 12)

"I think natural is best … but you cannot go to school without make-up!" (Hayley, age 11).

"Children were critical and angry about having to negotiate constraining and punishing gender and sexual norms, but felt there was nothing that could be done to change it.

"Any policy or practice aimed to address sexism and sexual harassment in schools needs to begin from and connect with the complex realities of children's own gender and sexual cultures - only then can we really understand girls' and boys' diverse experiences of why they feel the way they do, what it means for the way they act and how things can ultimately change" Professor Renold added.

Please click the relevant link below to read the Full Report or the English and Welsh versions of the Executive Summary report:

*Names have been changed, ages are correct

Read about the national press attention this research received since its launch and read a poem that was written by Ysgol Plasmawr students based on the research findings on the School of Social Sciences blog.