School Manager, Jo Marshall-Stevens, has won the ‘Exceptional Enhancement of the Staff Experience’ award for her work in the School of Journalism, Media and Culture.

Jo was recognised with the award at Cardiff University’s Celebrating Excellence Awards, which aim to highlight staff that have demonstrated an extraordinary level of commitment and professionalism in their role.

For more than twelve years Jo has ensured the smooth running of her professional services team and supported four separate Heads of School with regard the logistics of School management.

Jo demonstrated her organisational skills during the School’s relocation to Central Square, which required close consultation with staff about their needs, working with the project steering committee, architects, property developers, and multiple University departments over a period of several years to ensure not just a successful physical move but one which improved the support for wellbeing of staff.

Head of School, Professor Stuart Allan, said: “We are delighted to share the news of Jo’s richly-deserved award at this year’s Celebrating Excellence ceremony.

“Jo has been recognised for her stellar achievements as our School Manager extraordinaire. Her dedication to handling complex challenges in a thoughtful, conscientious manner – and always in good humour – is greatly appreciated by colleagues and students alike."

Also recognised during the evening was Sara Pepper, who won the Vice Chancellor’s Award for Excellence in recognition of her roles, namely Director of Creative Cardiff and most recently Chief Operating Officer of Clwstwr, promoting innovation in the Welsh creative economy.

Professor Justin Lewis, academic lead and co-founder of Creative Cardiff, commented: “We're really proud of Sara and delighted to see her fantastic work recognised by the Vice-Chancellor. She is a brilliant ambassador for the University. And her look of surprise when her name was announced was priceless!”

Everyone at the School of Journalism, Media and Culture would like to congratulate Jo and Sara on their achievements, and express sincere gratitude for everything they continue to do to enhance the School and University’s provision. 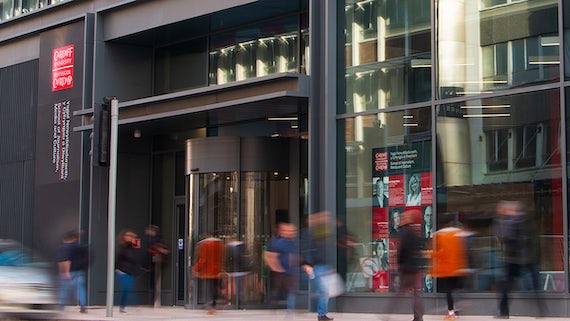 School of Journalism, Media and Culture

For more information about our research, courses and staff visit our School website.