Reshaping perceptions of the Second World War in France

Individuals’ personal experiences are central to new understandings of this crucial period in history.

Two weeks before COVID-19 sent France into lockdown, a major exhibition was being launched in Paris to critical acclaim.

The subject being covered was the Paris Exodus, a period of the Second World War that had, until now, been overlooked. Professor Hanna Diamond’s research has helped change that.

In June 1940 two million frightened men, women and children fled Paris in just a few days, after word spread that the Germans were advancing on the French capital. They joined six million other refugees already on the road. It was an unprecedented flight of people to the south and west of the country.

But although it was an event that would be etched in the memories of those who experienced it, it became buried in France’s consciousness, superseded in the media and in history books by the Occupation of the country by the Germans, which followed.

“What Parisians went through during that period is difficult to imagine,” says Professor Diamond. “People just grabbed whatever they could and left. If they didn’t have cars, they went on foot without knowing where they would end up.

“Panicked parents whose children were getting tired handed them to passing vehicles, thinking they’d be able to meet in the next town. But in the chaos that followed, 90,000 children were displaced from their families. It took months to reunite them all.

“The French didn’t want to delve into this difficult period, which signalled the complete collapse of society. But the impact of this event on individuals was huge. That trauma made them more prepared to accept the Vichy regime with the hope that they could return to some normality. It represents a pivotal moment.

“Eighty years on, I felt privileged to be able to help share and communicate those individual stories.”

The exhibition at the newly opened Museum of the Liberation of Paris – Museum of General Leclerc – Jean Moulin Museum was a highlight of Professor Diamond’s extensive research into the Second World War, specifically looking at the individual experiences of those who lived through it. 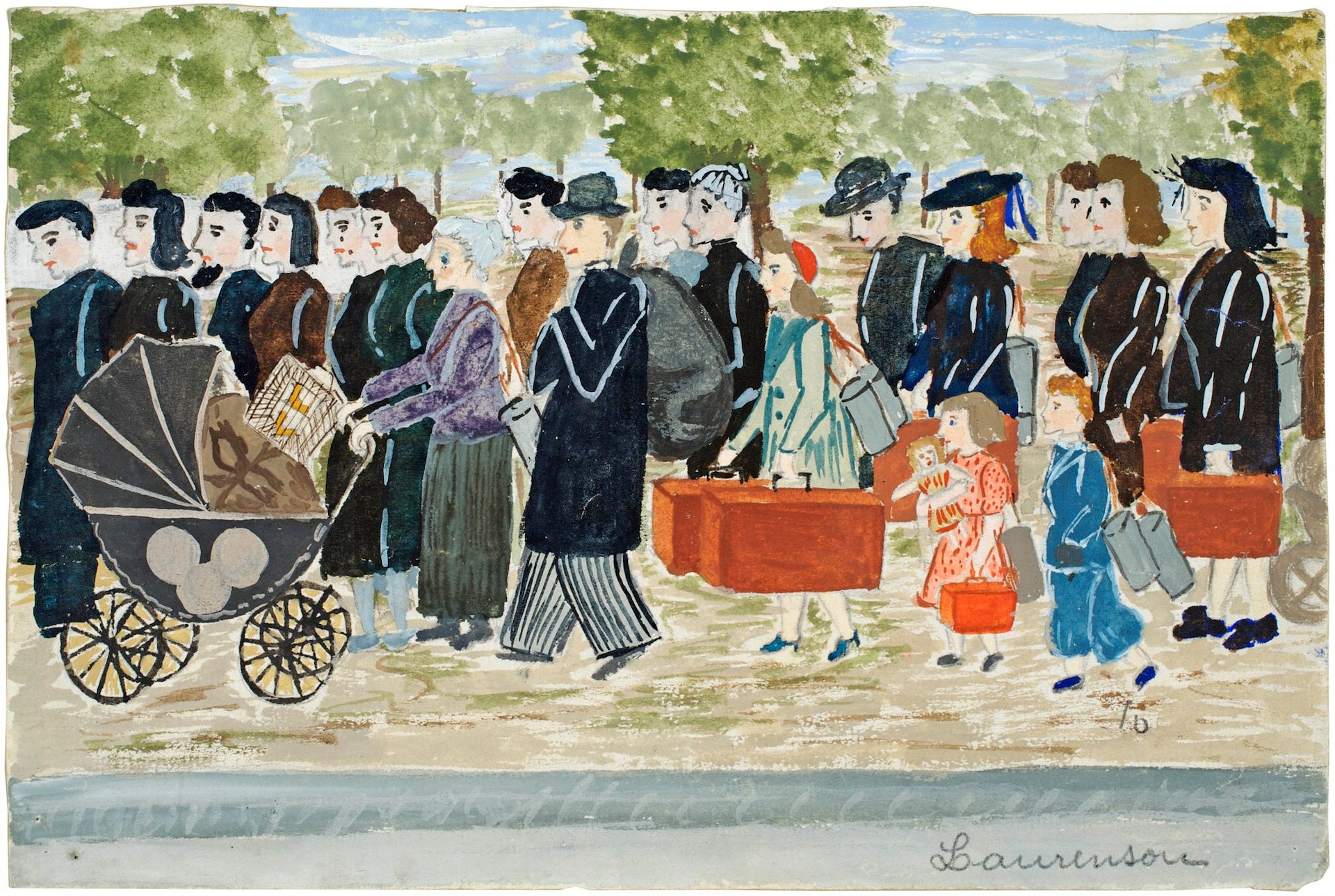 New insights into the past

Professor Diamond completed her undergraduate and postgraduate careers at the University of Sussex. From there, she gained a highly sought after ESRC-CNRS scholarship to undertake her DPhil research in France. In 1992, she was awarded a History DPhil on “Women and the Second World War in the Toulouse region”.

After several years working in a variety of Parisian higher education institutions (Université de Paris III: La Sorbonne Nouvelle, Ecole Normale Supérieure de Fontenay-aux-Roses, Université de Paris X: Nanterre), she was appointed lecturer at the University of Bath in 1993. She took up a Chair at Cardiff University in September 2014.

“The way history is studied has changed a lot since I started out,” she says. “It used to be viewed as being all about facts and dates. But it’s moved away from facts to people and a greater interrogation of sources.

“I was studying just at the beginning of that change – where academics were beginning to focus on individual experience as a way of understanding the big moments in history. When you study people’s memories of events – they don’t always focus on the facts and they misremember things. But that’s still their own truth of their lives.”

France and history are two subjects that have been of interest to Professor Diamond since she was a child.

“Growing up in London, my mother was always keen to point out landmarks, showing how history was all around us. History has been part of my life for as long as I can remember.

“My parents were strong Francophiles and I grew to love the country. I went on my first French exchange at 14. I spent time in Toulouse as an Erasmus student, where I would later carry out my DPhil research. I’ve learnt French along the way. I love the culture and feel a strong affinity with the people there. French friends have said I’m the most French British person they know.”

Professor Diamond’s postgraduate research focusing on Toulouse involved her interviewing women who had lived through the Second World War, as well as exploring local and national archives.

“Historians had assumed men and women experienced the Second World War in the same way – but they didn’t, and I wanted to show how that played out in people’s everyday lives,” she explains.

“To do this, I felt it was much better if I did the research as a local study, where I could go into detail and really drill down. I lived in Toulouse for two years and during that time felt very much part of the community and way of life there.

“Doing oral history and understanding how people talk about their lives has always been interesting to me. For this kind of research, you have to be a good communicator and be able to put people at ease.

“When I was a student people would joke, ‘Hanna loves to talk to people’s grandparents’. I was fascinated by the older generations’ experiences and what they had lived through and would always end up striking up conversations.”

Later on, as an established academic, Professor Diamond expanded on her research further with her successful book, Fleeing Hitler. It detailed the experiences of French people during the Second World War and has sold 10,000 copies.

Its follow-up website allowed Professor Diamond to record even more stories and carry out additional analysis of that period.

“People who read my book wrote to me saying, ‘I’ve got a family story, are you interested in this?’ There was an outpouring as a result of the book. I didn’t know what to do with all these family stories. That’s why I started the website. After holding on to these traumatic experiences for so long, it was clear people felt a need for their stories to be recorded and recognised.”

In May 2015, Professor Diamond was appointed to the Conseil Scientifique of the Musée de la Libération de Paris.

She worked with the museum’s chief curator and director Sylvie Zaidman as an expert adviser for the reworking of its permanent exhibition, a project which brought three separate museums together onto one new site above a former resistance command post on Place Denfert Rochereau.

On her recommendation, the newly established Museum of the Liberation of Paris – Museum of General Leclerc – Jean Moulin Museum has a dedicated room devoted to the civilian experience of traumatic defeat in May-June 1940, including the mass exodus of three-quarters of the population of Paris.

Sylvia Zaidman confirmed, “Professor Diamond’s involvement led us to give the Exodus more prominence; an event that is normally overlooked in favour of the Occupation, Collaboration and Resistance.”

Professor Diamond says: “I’ve always enjoyed working in collaboration with others. I’m fortunate to have been able to build up a strong community of people in Paris with whom I share research interests. I love to involve people with different expertise in my work so that we can explore new ways of approaching things.”

This work later led to the museum’s decision to dedicate its first temporary exhibition to ‘1940: Parisians in the Exodus’, which was curated by Diamond and Zaidman, and launched in February 2020. 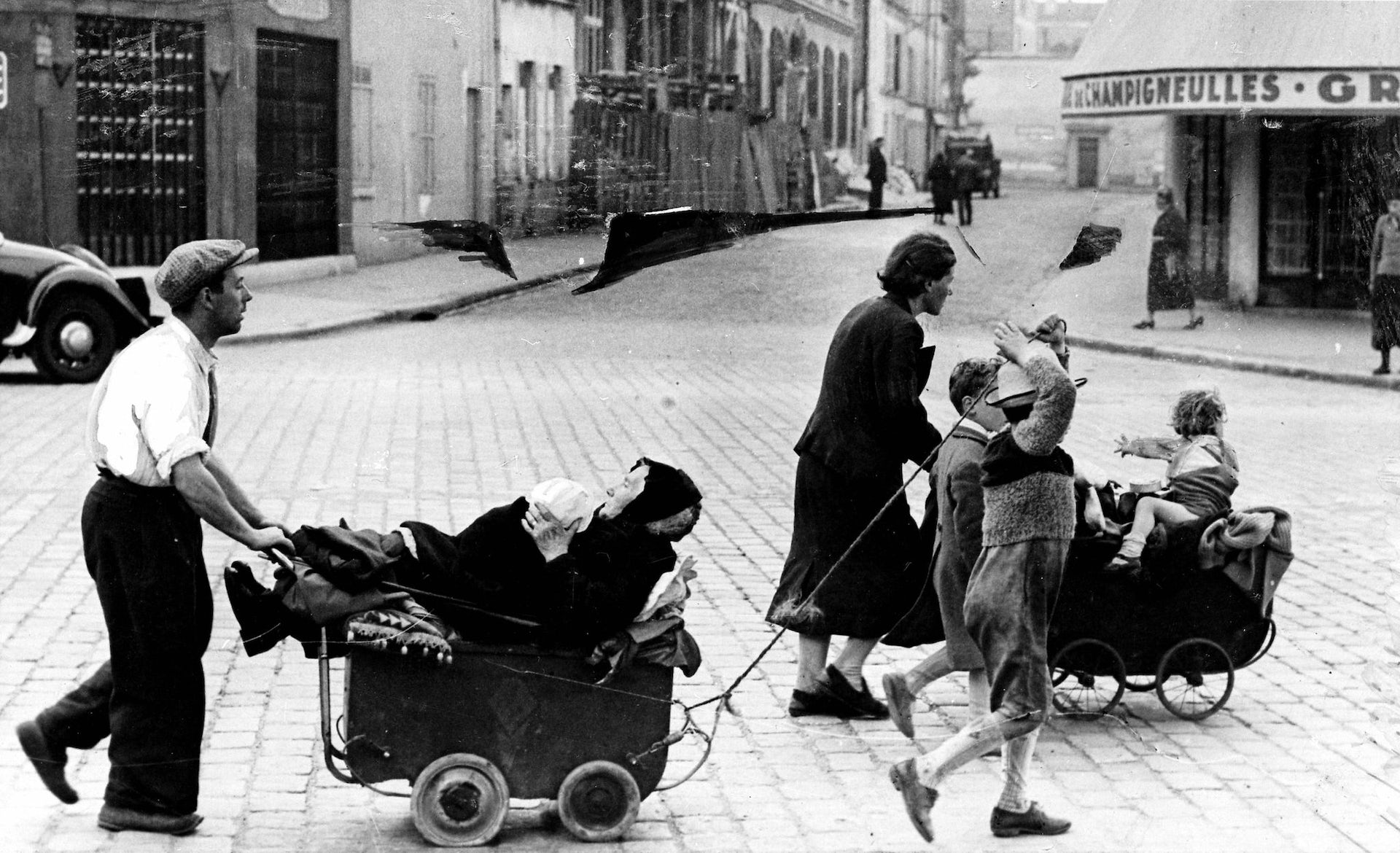 “It was bitterly disappointing when the exhibition closed 10 days later due to COVID-19,” says Professor Diamond. “It was really hard because we’d put so much work into it. But looking back, I now feel lucky that we’d been able to open it at all.

“Just prior to the lockdown, as the worry about COVID-19 increased, many people left Paris replicating some of the scenes of flight that took place in 1940. It certainly made the exhibition quite topical – and the media picked up on those similarities.”

Nevertheless, the exhibition continues to have an impact, with a film financed by the Economic and Social Research Council (ESRC), allowing viewers to revisit its highlights.

“Lots of French people who were able to come to the exhibition said how much it had resonated with them,” says Professor Diamond.

“I suspected these experiences had been recounted in piecemeal fashion, living on in the background as individual family memories that had been passed down. We were just pulling those stories together and saying, ‘here’s a part of France’s history that has been overlooked’.”

“People who specialise in trauma say it’s a common reaction not to talk about something that happened if it wasn’t on historical record – and yet it was a huge event that affected millions of people.”

Professor Diamond’s work continues, with a new book about wartime entertainer Josephine Baker in the pipeline. She has also held several consultancy roles with TV production companies who have visited this period – from assisting with scripting for children’s cartoon Curious George to appearing in a documentary called Witness to War for the Discovery Channel.

“There is still a real hunger to explore this incredible time in history,” she says. “As the older generation who lived through it pass away, I do feel a great responsibility to do all I can to ensure these events are not forgotten.” 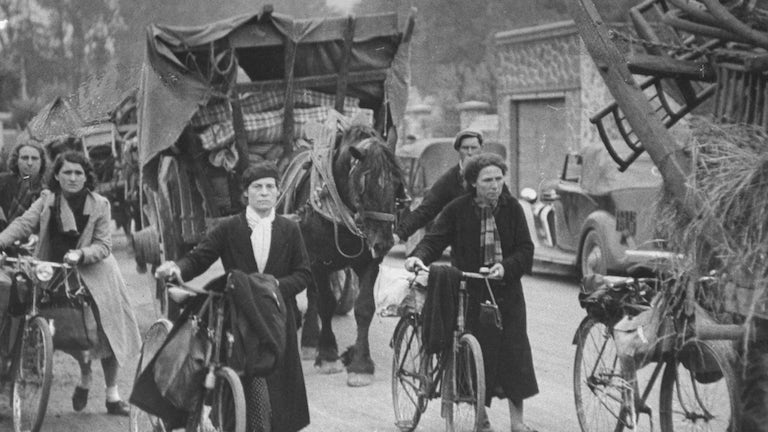 Families shared their stories of wartime France in response to Professor Diamond's book 'Fleeing Hitler', allowing her to carry out further analysis.

Professor Diamond's research influenced how the story of wartime France was told to visitors.

The personal stories of this significant moment in French history were central to the museum's first exhibition.

Professor Diamond won a Leverhulme research fellowship to write a new book on the wartime experiences of the entertainer.

An article on the untold story of star Josephine Baker.

An online talk for the French Embassy and institute Français to mark the 80th anniversary of De Gaulle’s appeal.

Consultancy and on-screen interviews for Like a Shot production’s documentary for the Discovery Channel ‘Witness to War’.

Commissioned article for the launch of The Conversation.fr on the Liberation in France