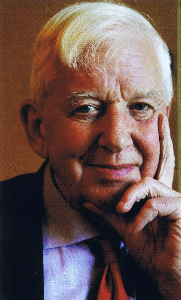 The internationally renowned Bach scholar, harpsichordist and organist Professor Peter Williams, who has died aged 78, was among the leading figures to establish a rigorous scholarly approach to the field of historically informed performance.

From 1996-2002 he was John Bird Professor at Cardiff University.

Observing his musical legacy it is the sheer volume of his writings, the quality and quantity of his musical performances, and the influence he had as an educator that made him a truly outstanding musical figure of our time. He was unique, combining skills as an organ historian, Bach scholar, formidable harpsichordist and organist, distinguished organologist and curator of historical instrument collections, indefatigable editor of both Handel’s and Bach’s music, editor of book series and journals including The Organ Yearbook, and an inspirational educator in performance practice studies. In later years he was also a probing philosopher about music and musical aesthetics, an acute and perceptive reviewer of new books and music volumes, and a witty and merciless critic on the follies of the latest trends in musical scholarship. But three subjects occupied him throughout his career - the organ, J. S. Bach and performance practice.

Born in Wolverhampton, his most formative influences were studies with Thurston Dart at St John’s College, Cambridge (1955-62), where Peter obtained his BA, Mus.B and PhD degrees, and with Gustav Leonhardt in Amsterdam. His approach to research was instinctively informed by his empathy with the instruments which he played, which led to the study of English Georgian organ music and organs as the subject of his doctoral dissertation. In 1962, at the remarkably young age of only 25, he was appointed lecturer in music at the University of Edinburgh, later becoming Professor, Head of Department and Dean while still in his forties. His specialist knowledge of period instruments, as both performer and scholar, made him in 1968 the ideal person to be appointed Director of Edinburgh University’s Russell Collection of Early Keyboard Instruments. From 1985–97 he was Arts & Sciences Distinguished Professor at Duke University, North Carolina, USA, a period during which he led an extremely active life lecturing in the university, being University Organist, as well as giving public concerts and teaching at summer schools. From 1996-2002 he was John Bird Professor at Cardiff University, supervising PhD students and performing memorable concerts including Bach’s Goldberg Variations. From 1996 to 2006 he served as Chairman of the British Institute of Organ Studies, subsequently becoming President, and he was Patron of the Cambridge Academy of Organ Studies from its inception in 2004.

It was first-hand experience of performing on historical harpsichords and organs, particularly the organs of Gottfried Silbermann, which inspired his writings. His first major publication, The European Organ, 1450-1850 (1966), described the major European organ-building traditions that were little understood in England at the time. Performing as harpsichordist in concerts at St Cecilia’s Hall, Edinburgh, led him to write Figured Bass Accompaniment (1970), and the installation of the Ahrend organ in the Reid Concert Hall was a catalyst for the magnum opus that defined his international reputation in Bach scholarship: the three-volume The Organ Music of J. S. Bach, first published by Cambridge University Press in 1980, and re-thought and revised in 2003. His mission to elevate organology and performance practice to new critical levels is enshrined in The Organ Yearbook, the annual journal which he edited from its inception in 1970. Further books followed: A New History of the Organ (1980); Bach: The Goldberg Variations (2001); The Organ in Western Culture 750–1250 (1993); The Chromatic Fourth through Four Centuries of Music (1998); J S Bach: A Life in Music (2007); The King of Instruments (2012). His editions of Handel’s and Bach’s keyboard music are full of information concerning sources and performance practice considerations, which inspire enthusiastic engagement and have led to a generation of more enlightened and authoritative performances.

Peter’s writings on Bach, organological and performance practice issues were all founded on historical sources, and characterised by intellectual precision and literary conciseness. In reaction to positivist musicology, emanating from Germany and the USA, he encouraged the deconstruction of historical evidence in a way that opened our ears to different possibilities, inspiring us to question the music instead of merely accepting received wisdom. This often led more to the framing of questions rather than defining answers regarding authenticity, chronology, context, style and performance practices. He was the first to question, for example, the accuracy of every single word in the title of the famous organ work ‘J. S. Bach’s Toccata and Fugue in D minor for Organ’ (BWV 565), with which all organists  now concur. As a teacher, his depth and breadth of knowledge and wealth of stimulating ideas, combined with constructive criticism, kindness and generosity, made him extremely effective in developing the skills of the next generation of scholars and performers. He would frequently lecture on topics such as ‘What the notation doesn’t tell us’, and he regretted that the subject of performance practice had not been adopted more comprehensively in university music departments, with all the subjects that emanate from it: source studies, notation, genre & style, analysis, instrumental techniques, harmony, counterpoint, improvisation, rhythmic conventions, ornamentation, organology, temperaments, historical contextual studies, as well as the science and art of editing. Peter’s teaching philosophy has been summed up as not so much ‘answering the questions’ but ‘questioning the answers’.

In spite of a terrible accident to four of his fingers, which entailed months of surgery, he maintained his annual ritual of playing through all of Domenico Scarlatti’s 555 Sonatas. During the last few months, while suffering the debilitating effects of acute myeloid leukaemia that eventually took his life, he finished his book Bach - A Musical Biography, to be published by Cambridge University Press in May this year. The final proof-reading corrections (painstakingly assisted by his wife Rosemary) were signed off within hours of his death. He passed away at 23.55 GMT on 20 March, five minutes before the start of J. S. Bach’s birthday anniversary - although in Leipzig it was an hour later. Bach extended a hand to Peter to join him, and Peter accepted.

He leaves a widow, Rosemary, their two sons, and two children with his first wife.